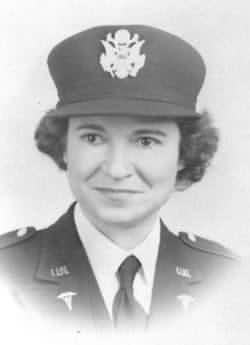 From Pasco, WA, US | Born in Meredith, New Hampshire

Ida F. Thompson Tommie Dunn passed away, June 30, 2001, at Beverly Health and Rehabilitation Center in Pasco, Washington. She was born to Frank and Eva Thompson in Meredith, New Hampshire on January 21, 1909.

She was preceded on death by her parents, her brother Harold and sister-in-law Shirley, and husband of 46 years, Kelsey Dunn.

Tommie attended schools in Laconica, New Hampshire, Boston, Massachusetts and graduated from nursing school in 1935. She was employed in various nursing capacities on the east coast until joining the U.S. Army Nurse Corps on June 1, 1943. She served 5 ½ years and retired as a Captain. She left the Army and worked for G.E. at Hanford as an Occupational Nurse until 1952.

She met Kelsey Dunn at Hanford and they married on June 29, 1951. In 1952 they embarked on an adventure that would, over the years, take them to Ohio, Pennsylvania, Jamaica, West Indies, New Orleans and finally to Little Rock, Arkansas. They bought a refrigeration/air conditioning business, which they operated until retirement in 1974. They returned to the Tri-Cities in 1995. During theses years Tommie was a housewife and worked as a volunteer nurse in the various cities where they lived. The family would like to thank the staff of Beverly Healthcare especially Carol Aclenbough and Marlene Howard for the care they provided to Tommie. She was a member of the Episcopal Church of Our Saviour, Pasco, Washington

Memorial contribution may be made to the Charity of your choice.