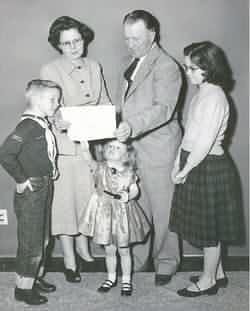 From Richland, WA, US | Born in Clearmont, Wyoming

Nina I. Greer White, 83, passed away on December 17, 2001, in Richland, WA. She was born on April 10, 1918 in Clearmont, Wyoming to Ira and Anna Dykes. Nina graduated as a Registered Nurse from Sheridan Nursing School and married Spencer Greer in 1940. They moved to Richland where Nina continued a 40-year Career in nursing at Kadlec Hospital and HEHF. Nina and Spencer had three children, Mary Ann, Larry, and Martha. Spencer preceded her in death in 1967 after twenty-six years of marriage. She retired in 1983 and enjoyed her family, gardening, birds, and various crafts. She married Jack White in 1989 with whom she enjoyed traveling and companionship. Nina was preceded in death by her parents, husband Spencer Greer, two brothers, and three sisters. She is survived by: her husband, Jack White of Richland, son, Larry and Carol Greer of Sumner WA, daughter, Mary and Greg Larson of Chehalis WA, daughter Martha and Gary Scotto, of Andover NJ, eight grandchildren, and thirteen great grandchildren.