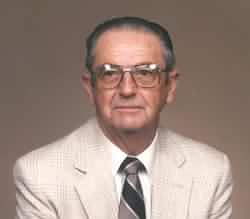 From Richland, WA, US | Born in Grandview, Washington

Delbert graduated from Sunnyside High School in 1941. Soon after he worked in the ship yards of Portland, Oregon until he joined the Army-Aircorps where he was a Staff Sergeant in the 448th Bombardment group in WWII.

He moved to Richland where he became a security patrolman for General Electric. Delbert met his bride of 46 years, Donna Mae Willis, while working at G.E. He retired from Rockwell after 35 Years of service.