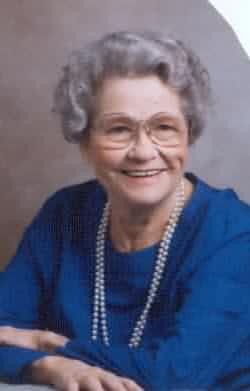 From Richland, WA, US | Born in Fairplay, Missouri

Beloved Mother, Grandmother and Great Grandmother Martha Elizabeth McCall Hoover passed way on May 3, 2002 at her home. She was born on June 17, 1914 in Fairplay, Missouri. She had four brothers and sisters. When she was nine months old her father, mother, and the children moved to Lamar Colorado where she grew up and attended school.

She married Clarence Bill Hoover on August 14, 1933. Bill worked construction and traveled to various work locations. They lived at Hanford in 1944 and later returned to Richland, which became their home. Martha worked as Banquet Manager at the Hanford House during, the 1960s and 70s, after Bill passed away in 1966.

Martha was a member of VFW and president of the ladies auxiliary for two years. She also belonged to the Eastern Star and Eagles clubs.

Not dead to us who loved her Not lost, but gone before
She lives with us in memory And will forever more.

God is keeping her safe for us, until we meet again.

Graveside services will be at Sunset Memorial Gardens Monday May 6, 2002 at 2:00pm