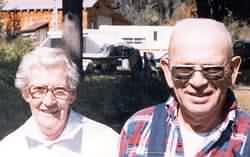 From Kennewick, WA, US | Born in Slayton, Minnesota

Mildred was born on Christmas Eve in 1914 to Lars and Hulda Fihn in Slayton, Minnesota. She attended High School in St. James, Minnesota, graduating from nursing school in Moorehead, Minnesota in 1936. During the war years she worked as an RN in Emmett, Idaho; Miami, Florida; Williamsburg, Virginia and Vancouver, Washington. She married Floyd Kelley on April 13, 1941, in Emmett, Idaho, retiring to become a full-time wife and mother after Floyd's return from World War II. Mildred and Floyd followed construction for several years, settling in Benton City in 1954 to raise their 3 daughters.

Mildred enjoyed gardening, canning, cooking, sewing and weaving, and was an active member of The Highland Ladies' Club and St. John's Lutheran Church. Mildred and Floyd retired to Weiser, Idaho, in 1978, traveling and exploring new places to rock hound. Mildred took a great deal of pleasure from the rock jewelry Floyd crafted. After Floyd's death in 1985, Mildred returned to Benton City to be near family and friends.

Mildred will be remembered for her sense of humor and quick wit and will be missed deeply by each person whose life she touched. The family would like to thank the special wonderful angels at Hospice House - particularly her rock hounding buddy ''Dottie''.

She was preceded in death by her husband, Floyd Kelley; grandson, Allan Gary; 2 brothers, Luther Fihn and Carl Fihn and a sister, Hulda Fihn.