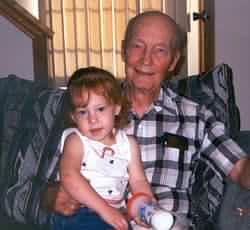 From Richland, WA, US | Born in Liverpool, Pennsylvania

Raymond C. Bud Leffler Passed away Aug. 4 th at Kadlec Medical Center. Bud was born in Liverpool, PA. March 29, 1915 to George and Anna Leffler. After graduating from high school, he joined the Civilian Conservation Corps and served two years. In 1935, Bud met and married his wife, Lula Balser, in Buena Vista VA. They moved to North Richland in 1948 and then to West Richland where they built their house.

In 1947, Bud joined the plumbers and pipefitters local union 216 in Lynchburgh VA. In 1952 Bud became a member of local 598. As a member, Bud served 9 years on the State Arbitrator and Negotiator Committee and 6 years as Business Manager. He retired in 1977.

Bud was a member of the Seventh-day Adventist Church, the Masonic Lodge #283 and served as Worshipful Master in 1963. He also served as Worthy Patron of Eastern Star in 1956 and 1995.

Having no children, Bud was loved by many nephews and nieces. He became a father and grandfather figure to many of those in the Tri-City area who called him Pa. In the Tri-City area he is survived by Shirley Jack Matheny, Murvelle Wilson, Rodney Sr. Rhonda Matheny, Steve Vicky Matheny, Mary Steve Harrelson, Rodney Jr. Heather Matheny, Ryan Stephanie Matheny, Russell Matheny, Stefanie Matheny, three great great great nephew and nieces, Hunter, Taylor and Rylee Matheny and beloved friend Marsha Osbourne.

Donations may be made in Buds memory to the charity of your choice.