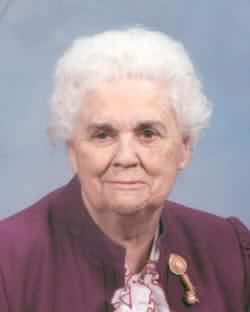 From Kennewick, WA, US | Born in Ruleville, Mississippi

Alpha W. Webb, 89, died November 29, 2002 at her home in Kennewick. She was born in Ruleville, Mississippi on February 16, 1913. She lived in the Tri-Cities for 58 years. Alpha was a homemaker and mother. She was a charter member of the Richland Assembly of God Church.

Alpha is preceded in death by her husband, Earven C. Webb in 1977.

She is survived by her four children, Kathyrn Williamson,Luther Hudson, Kenneth Webb and Jackie Perkins, all of the Tri-Cities. She was blessed with seven grandchildren, Theresa Adams, Gary Davis, Larry Davis, Brett Hudson, Rodney Hudson, Jason Webb and Kristine Webb. She also had four great-grandchildren, Marie and Amanda Davis, and Kirsten and Samantha Hudson.