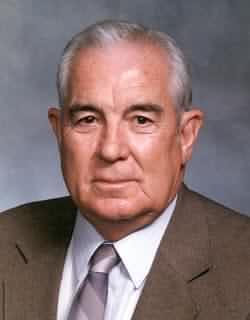 From Richland, WA, US | Born in Tulsa, Oklahoma

Glenn Walton Martin 79, of Richland, passed away peacefully at the Tri-Cities Hospice House at 7:30 P.M. Thursday December 19, 2002. Glenn was a loving husband and father.

He was born on February 1, 1923 in Tulsa, Oklahoma to Violet and Russell Martin.

After service to our country in WWII he worked in the space industry as a missile technician on the Atlas and Titan programs. After leaving the defense industry Glenn worked at Cape Kennedy supporting the Mercury, Gemini, and Apollo space missions.

In the early 70s Glenn relocated to the Tri-Cities and ultimately retired from Battelle in 1985 as a pipe fitter/welder.

Glenn was active in the Assembly of God Churches throughout his life. He was also active in The Masons, little league baseball, golf and model airplanes, which he built and flew.

Glenn is preceded in death by his mother Violet Barber and father Russell Martin.

Donations may be made to United Parkinsons Foundation 833 W. Washington Blvd. Chicago, IL 60607