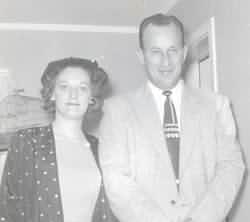 From Richland, WA, US | Born in Whitewright, Texas

Jesse DeBerry, 85, of Richland, passed away on January 20, 2003 at Lourdes Medical Center.

He was born February 12, 1917 in Whitewright, Texas to Henry and Nora Benson DeBerry, the fourth of five children. He enlisted in the Navy, and served in the South Pacific during World War II. After the war, Jesse moved to the Tri Cities, where he lived for 58 years.

He worked in construction at Hanford, and retired from J.A. Jones Construction as a Superintendent in 1982, after 31 years. Jesse was a member of the Elks, and had been a member of West Richland Golf Club. He enjoyed playing golf, and in his later years loved to follow his Seattle Mariners, and sports in general.

He was preceded in death by his loving wife Jean, parents Henry and Nora DeBerry, sisters Lorene Haliburton and Loyce Rayburn, and brother Robert DeBerry