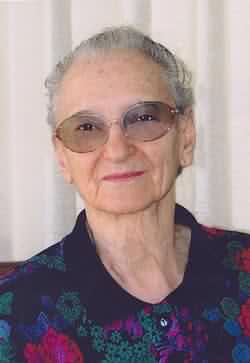 From Pasco, WA, US | Born in Emerson, Nebraska

Edna R. Adams, 82 passed away peacefully on June 9th, 2003. Edna was born September 4, 1920 in Emerson, Nebraska to Michael & Anna Skow. Edna was one of the rare precious souls on this earth who dedicated her life to helping others. If you had the pleasure of knowing Edna you were touched by her kind, helpful and humorous spirit. Shortly after graduating from high school she enrolled in Nurses training in Sioux City, IA. In August of 1941, Edna married Loyd Baker of Pierson, Iowa. Edna and Loyd spent their years farming and logging in Nebraska, Minnesota and Montana. In 1951, Edna was handed her first tragedy, Loyd was killed in logging accident.

Ednas dedicated and optimistic spirit was what kept her going. She continued with her passion of helping others and re-entered the nursing profession again. In July of 1952, she married Harry Nesseth of Alvwood, MN. They were married in Livingston, Montana. Edna and Harry shared a beautiful life together. Harry was employed in the road construction industry as a blasting man, so they had the pleasure of living in various communities around the Pacific Northwest. Edna and Harry were blessed with two children, Curtis born in 1957 and Holly born in 1959. Once again tragedy entered Ednas life in 1962 when Harry was killed in construction accident. The same passion and drive for living and helping others is what kept Edna going. Edna was still in the nursing profession and was acting as the primary caregiver for her aging parents. She balanced the challenges of single parenthood as a working mother, and serving as the caregiver to her aging parents. After the death of her parents, she and her children moved to Missoula, Montana, Wakefield, Nebraska and finally to Pasco, Washington in 1966. In the Tri-Cities community Edna worked at Kadlec Hospital in Richland as a Registered Nurse.

In 1970, Edna married Harold Skip Davis. Edna and Skip resided in Richland and enjoyed spending their spare time traveling around the country in a travel trailer. They shared 13 years together until Skip passed away in 1983. Edna had retired from the nursing profession but still continue to serve her community. She dedicated her spare time to assisting with the Tri-Cities Food Bank. This is where she met Ernie Adams. She and Ernie were married in 1985, and they continued to dedicate their time to the needs of others. Both were very active in the Tri-Cities Food Bank, Northwest United Protestant Church, and many other service agencies in the Tri-Cities area. Ernie passed away in 1999.

Memorial Service will be at Einans Funeral Home in Richland WA, Saturday, June 14th at 10:00 a.m. Visitation will be held on Friday from 5:00 to 8:00 p.m. Donations can be made in Ednas honor to the Tri-Cities Food Bank.