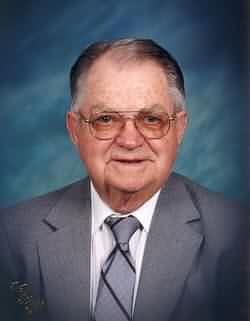 From Richland, WA, US | Born in Elba, Arkansas

Herbert Garland Lasater, age 82, went home to be with the Lord on June 17, 2003 at home surrounded by his family.

Herb was born on August 28th, 1920 in Elba, Arkansas to J. R. and Myrtle Lasater. He was the youngest of three boys. He grew up in Arkansas and joined the Army when he was 21 and served for 3½ years during WWII.

He married the love of his life Beulah Mae Nixon August 17, 1942. Herb and Beulah moved to Walla Walla, WA in 1947 and then moved to Richland, WA in 1962. From their marriage God blessed them with six children.

Herb worked for Pringles Power Vac from 1953 to 1975 when Herb and Beulah bought the Tri-Cities franchise from Bud Pringle. He continued to run the company until he sold it to his son in 2000.

He was a lay pastor for app. 30 years. He was an active member of the Richland Baptist Church.

He was an avid fisherman, gardener and really enjoyed the family domino tournaments. His little granddaughters were the light of his life.

He was preceded in death by his parents J. R. and Myrtle Lasater, brothers Elmer and Elbert, daughter Linda June, son Garland and son-in-law Randy Snow.

Viewing will be Thursday June 19 from 5-8 pm at Einan's Funeral Home.

Funeral services will be held Friday June 20 at l0 am at Richland Baptist Church, George Wash. Way with graveside services to follow at Sunset Memorial Gardens.

We thank God for the wonderful Christian example Herb was to all of us.