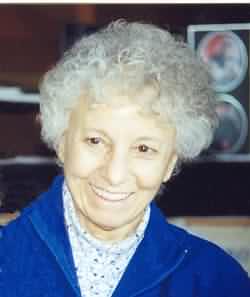 From Richland, WA, US | Born in Burley, Idaho

Ruby was born on June 4,1928, in Burley, Idaho, and grew up in Heybum, Idaho. After graduating from high school, she met Lee Bob Draney and they were married on July 24,1948. In 1952, they moved to Moses Lake and later to Warden, Washington, where they owned and operated a store selling NAPA Auto Parts and John Deere Equipment. In 1979, they moved to Richland, where she was employed as a quality assurance engineer at the United Engineers & Constructors.

Ruby was extremely young at heart and had a great zest for life in all she did. As a young mother, she could out-pitch and out-run her sons' Little League teammates, and she continued playing sports with her family even as a grandmother. She was often mistaken for being decades younger than she was because of her youthful appearance and ''spunky'' personality. Her luscious pies were the treat of every family gathering and her many talents in painting, sewing, cooking and quilting were evident in the countless gifts she was constantly making for her dear and treasured friends. Her contagious laugh and radiant smile will be sorely missed by all who knew her.

Ruby loved life-which included family and friends, oil painting, crafts especially birdhouses, sewing, quilting, dancing even teaching line-dancing, and traveling to see and do new things. Favorite memories include family trips to the coast and camping in the mountains.

She is survived by her two sons and their wives: Lon and Elaine Draney of Pasco and Alan and Mary Draney of Kennewick; ten grandchildren: Jessica and Ben Corbaley, Tami and Joe Cutler, Levi, Chris, Vance, Michael, Sebrina, Angie, Britney and Julia; and three greatgrandchildren: Sebastien, Kaitlin and Skyler. She was preceded in death by her loving husband, Lee Draney; her parents, Archimedes and Ethel Winnett; and all of her five brothers and three sisters.

Viewings will be held at Einan's Funeral Home in Richland from 6-8:00 p.rn. on Monday, June 30 and beginning again on Tuesday, July 1 at 9:00 a.rn. at the Church of Jesus Christ of Latter-day Saints Chapel at 1321 Jadwin Avenue in Richland. The funeral will follow at 10:00 a.m. Graveside services will then be held at Sunset Memorial Gardens in Richland.