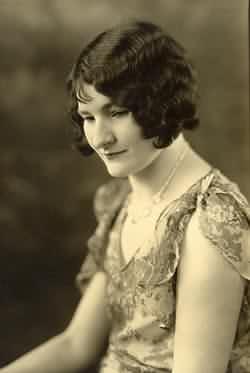 From Pasco, WA, US | Born in Schaffer, Michigan

God took Viola Marnie, our Mother, Grandmother and Great Grandmother to be in heaven with him on Tuesday, July l5, 2003. My mother, Viola, was my best friend and the best mother anyone could ever have. She was the bravest person I knew. Viola Mary Magnuson was born January 1, 1906 to Henry and Natalie Nelson in Schaffer, Michigan. Viola was the 4th child born into a very loving and happy family of 7 brothers and 3 sisters. She attended 10-Mile Creek school in Schaffer, Michigan. When beginning school she spoke only French. She attended school through the 8th grade, but her knowledge was immeasurable. After finishing school Viola worked as a Nanny in Escanaba, Michigan where she met and worked for the Bennett family. They treated her as one of the family. Viola married Raymond Elmer Magnuson on August 3, 1930 in Escanaba. They were married for 38 years, until Raymond's death in 1968.They bought a I-room schoolhouse in Parrinville, Michigan and remodeled it into a home. In 1941 Raymond went to Panama to work for the Corps of Engineers. He was there for 16 months. While Raymond was gone, Viola cared for their 2 little girls and handled the running of the home, which included chopping wood and hauling water. In September 1943 the family moved to Hanford, Washington, the largest trailer camp in the world. Viola told many interesting stories about growing up in Michigan, one such story being about riding in the horse and buggy and horse and sleigh in the winter, as well as stories about living at Hanford. Viola was an avid reader from the time she was a young girl. She loved working in the yard, planting flowers and growing roses. She really had a green thumb. Viola was a wonderful and cheerful person, always smiling. She had a very good attitude and made others feel better by talking to them. Her whole life centered on being a good wife and mother and she excelled at both. Viola had a heart of gold. There wasn't anything she wouldnt do for any of us. Her kindness and giving were endless. She was a true role model for all of us. She loved her family and they meant the world to her. Viola was a member of Christ the King Catholic Church since 1943 and a member of the Alter Society. Viola's Catholic faith provided her with great strength. Viola was a longtime Richland resident, living in Richland until 1997 at which time she moved to Pasco living with her daughter Suzie until her death. She was a patient at the Mid Columbia Kidney Center in Pasco for the last 5 years. At the age of 96 she spoke about her life at Hanford to students at the Crehst Museum in Richland.

A Recitation of the Rosary will be held on Monday July 21st at 7:00 pm at Einans Funeral Home with visitation from 5-8pm. There will be a Mass of Christian Burial held on Tuesday July 22nd at Christ the King Catholic Church at 10:00am followed by a burial at Sunset Memorial Gardens in Richland.