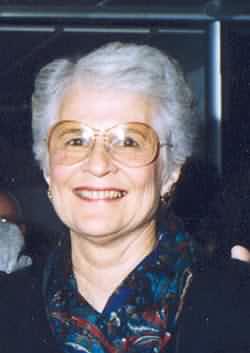 From Kennewick, WA, US | Born in Herman, MN

Gary was born June 30, 1925 in Herman, MN. Gary spent her youth in Spokane, WA and graduated from Lewis and Clark High School. She married her husband, Warren, in March of 1946 and after living in Shelton, WA, they moved to the Tri-Cities over 40 years ago.

For a few years, Gary worked locally as a bookkeeper at Baskin Robbins where she routinely enjoyed chocolate almond ice cream cones.

Gary was a kind woman with a large heart whose generosity knew no bounds. She was always thinking of others before herself and those who were lucky enough to have Gary in their lives will fondly remember her warmth, style, and grace.

Garys loves and interests included animals, traveling to Hawaii, cruises, tennis, skiing, and spending time with family and friends. One of her favorite activities was feeding the many squirrels that soon learned Garys house was the place to be!

Gary was extremely patriotic and proud that her two grandsons followed in the footsteps of their grandfather, Warren, by currently serving their country in the U.S. Military. Gary would lovingly brag about them to everyone she met!

Gary is survived by her daughter, Barbara A. Sorenson, of Richland, WA; brother, Clare Cater and wife Louise of Salem, OR; granddaughter, Megan and husband LT Taran G. Myrick, of Ft. Riley, KS; grandson, SSG Andrew J. Sorenson and wife Laura, of Ft. Stewart, GA; great-grandson Robert Warren Sorenson of Ft. Stewart, GA; and numerous nieces and nephews. She was preceded in death by her father and mother, Charles and Gladys Cater, and her beloved husband, Warren J. Woods.

The funeral will be held on Wednesday, July 16, 2003 at 9:00 a.m. at the First United Methodist Church in Kennewick, WA with reception immediately following. Graveside services will be held at 11 a.m. at Sunset Memorial Gardens in Richland, WA.

Memorial contributions may be sent to the Tri-Cities Chaplaincy Hospice House in Kennewick, WA.

Garys granddaughter, Megan, wrote this obituary in her honor.