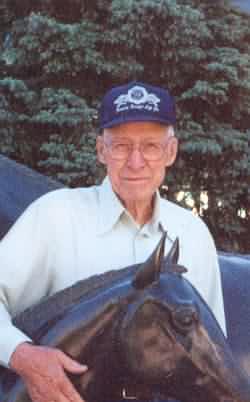 From Richland, WA, US | Born in Iberia, Missouri

Clark S. Woolery, age 84, died Monday at Quail Hollow in Richland. He was born in 1918 in Iberia, Missouri and lived in Kennewick since 1952. Clark was one of 11 children, raised on a family farm in Missouri. After completing the 8th grade in 1935, his dedication to hard work led him to the Civilian Conservation Corps, the Vancouver Shipyards, local highway construction sites as a blade operator, and finally to Hanford as an operating engineer at the Purex N Reactor where he retired in 1979.

Clark was married to Marie Beals and they had two children. They divorced and he met and married Josephine Kuntz in 1949. Together they had two children, settling on a two-acre farm in Kennewick. In the 1960's Jo and Clark, entered the grocery business, building Woolery's Jet Mart in Kennewick, now known as Jet Mart Conoco. In 1985, Jo and Clark divorced. He later married, Evelyn Bonnot of Missouri. They divorced in 1992.

He loved the out of doors and being active, including building two houses, and hunting and fishing with his dogs and horses. In later years, he enjoyed beekeeping, his roses, the Seattle Mariners, and traveling with friends to many places.

Clark is preceded in death by his parents, 5 siblings and his son, Sherrill Dean. He is survived by his daughters Joann Berg of Kennewick and Shirley Toth of Portland, OR, and son Chuck Woolery of Rockville, MD, and their families, six grandchildren and four great grand children.

A Memorial service will be held Saturday, August 9, 2:00 PM at Einan's Funeral Home in Richland. Final internment will be in Missouri. In lieu of flowers, donations may be made to Tri-Cities Chaplaincy Hospice or Global Plan Initiative, 513 Maple Ave. Vienna, VA 22180.