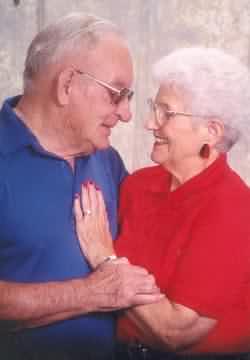 From Othello, WA, US | Born in Princeton, Idaho

Ross Weible, 80, passed away peacefully at home on August 30, 2003, after a courageous battle with cancer.

He was born April 5, 1923, to Alfred and Emma Gonser Weible in Princeton, Idaho. Being raised near Farmington, WA, he also received his education there.

He served in the U.S. Army Corp of Engineers during World War II. He married the love of his life, Frannie Elder, in June of 1949 in Garfield, WA.

In 1952 Ross began leveling land for irrigation in the Columbia Basin and shortly thereafter settled in Othello where he enjoyed farming nearly 50 years. Ross also enjoyed hunting, fishing and especially piloting his plane. He was very talented in metal fabrication and able to fix most anything. He was in his glory operating a tractor or heavy equipment.

Graveside service will be held on Tuesday September 2 at 11:00 AM at Sunset Memorial Gardens for family and friends. His celebration of life will follow at 1:00 PM at the Calvary Church, 1520 Fowler Street, Richland, WA with a reception to follow at the Shilo Inn in Richland. Arrangements by Einans Funeral Home.

Those wishing to honor his memory may contribute to the Shriners Children's Hospital or Adams Grant County Hospice Home Health Care in Moses Lake.