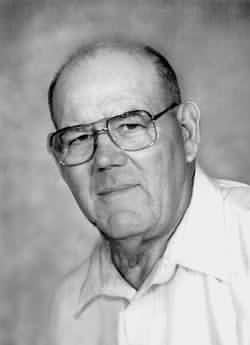 From Richland, WA, US | Born in Cass, Arkansas

Richland lost one of her most familiar characters this week when Samuel Carter Russell passed away at Richland Life Care Center on Tuesday, August 19th, 2003. He was born to Addie Jane Mahaffey and Elias Russell in Cass Arkansas, coming into this world on February 28th, 1915, weighing in at twelve pounds, and was known all his life for being a bit bigger and taller than the average man. He was 6'3'' or better as an adult, and was jokingly called ''Big Sam'' by many who were awed by his height and the size of his hands. Fortunately, God saw fit to equip him with a heart the same size, and he spent all his life taking pleasure in helping out the elderly, and keeping an eye on the kids he came in contact with.

Growing up on the family farm in the Ozark mountains, with seven brothers and four sisters, he was well acquainted with hard work. In 1934, when he was nineteen, he enlisted in the peacetime army, serving mainly at Fort Sills, where he was assigned as driver to Dwight Eisenhower, spending many hours with ''Ike''. He was very proud of this duty, and loved to tell anecdotes about the time before Ike became a five star general and eventually America's 34th President.

After leaving the peacetime army, he worked in the East Texas oil fields, and as a lumberjack in Idaho. He also spent time farming and herding sheep in Colorado, as well as trying his hand at a multitude of other trades. When World War II started, he re-enlisted in the army, serving in Northern Italy and North Africa, where he kept the lifelines of roads and railroads up and running to supply the Allied war efforts. He organized soldiers and civilians, learning how to communicate despite the various language barriers. When the army needed it done, they learned to call on Sam.

After the war, he returned to the U.S, working as a fireman for the Fort Lewis Fire Department. His childhood sweetheart, Wanda Jane Turner, came West to join him, and they were married on December 27th, 1945, making their home in Tacoma, where they lived until after the birth of their daughter, Edna. Then, Sam or Carter, as he was known to family and friends took his young family and moved to Richland, where he lived for the remaining 56 years of his life, working first for the Richland City Fire Department, then transferring to the Hanford Fire Department.

''Mr. Russell'' loved to visit with anyone at any time, smiling and winking even from his hospital bed during his last days. When his children were in school, he volunteered as chaperone and coach for the Columbian Drum and Bugle Corps, traveling all over with his son, Lloyd, to the various competitions, and working a kind of benevolent blackmail while soliciting contributions for the Corps through booster button sales at the Water Follies. Small children were always welcome on his knee, and every business he frequented in Richland knew him by name, from box boy to manager.

Samuel's beloved wife, Wanda, passed away on April 11th, 1995. He is survived by his daughters, Edna Gonzoles, Richland, WA, and Ruth Pierson, West Richland, WA, as well as his son, Lloyd Russell, who lives in Snowflake, Arizona; his three grandchildren, Michael Gonzoles and Jennifer Pierson, Richland, and Alyssa Pierson, West Richland; and his great-grandson, Tennessee Gage McDonnough, Richland. He is survived by only one of his eleven siblings, Seldon Russell of Ozark, Arkansas.