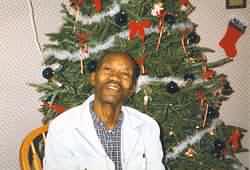 From Richland, WA, US | Born in Pine Bluff, Arkansas

Carrancy Nichols was born July I, 1918 in Pine Bluff, Arkansas to Richard Nichols and Francies Heard.

He was the oldest of eleven brothers and three sisters.

Carrancy accepted Jesus Christ as his personal Savior many years ago. Carrancy moved from Pine Bluff, Arkansas at the age of 16.

He moved to Gary, Indiana, then to Chicago, Illinois, and Milwaukee, Wisconsin. Somehow while looking for work, Carrancy ended up in Pasco, Washington, and then he moved to Yakima, Washington where he lived and raised his family with his beloved woman Flossie Trowell.

Finally he moved to Richland, Washington to stay with his nephew and niece Ric and Tiny Nichols.

Carrancy was very out going. He had one of those personalities that people felt good when they were around him.

Fishing!! He loved fishing. Also, he believed family was very important. Carrancy would give the shirt off his back to anyone he came in contact with who needed it. Carrancy Nichols will be greatly missed by his family and friends alike.

Funeral Services will be held on Saturday, September 6, 2003 at Einans Funeral Home in Richland at 11:00am. Interment will follow in Sunset Memorial Gardens.

Visitation will be held on Friday, September 5, 2003 at Einans Funeral Home from 5 to 7pm.