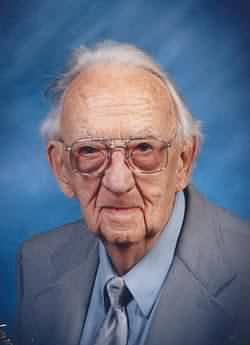 From Richland, WA, US | Born in Rapid City, South Dakota

August Gus William Mallow, 94, of Richland, passed away December 25, 2003, at Kadlec Medical Center. He was born in Rapid City, South Dakota on November 27, 1909, to Albert and Effie Mallow.

August was a resident of Richland for 60 years. He was employed by Dupont, General Electric, Iso-Chem and retired from ARHCO as a maintenance manager. He was a long time parishioner of Christ the King Catholic Church and a member of the Knights of Columbus.

August was preceded in death by his mother, father, three brothers and his son, Richard D. Mallow.

August was a dedicated family man and a kind soul. He touched the hearts of many and will be missed by family, friends and the community.

The family asks donations be given to Christ the King Building Fund, 1126 Long Ave. Richland, WA 99352 in Augusts name.