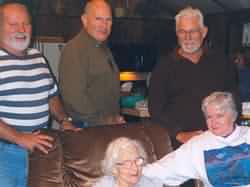 From Kennewick, WA, US | Born in Winterset, Iowa

Gladys Rae Leavitt, 92, of Kennewick, passed away December 30, 2003 at Kennewick General Hospital. She was born on February 11, 1911 in Winterset, Iowa to Homer and Lilah Rhodes.

She moved as a young child from Iowa to Spokane, WA where she attended school and was raised in the Methodist Church. Gladys attended Lewis and Clark High School and later attended nursing school. She worked in the Spokane hospitals until she married and became a full time homemaker.

Gladys was a member of the Southside United Protestant Church and lived the Tri-City area for over 50 years.