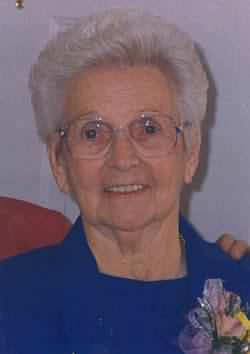 From Cle, Elum, WA, US | Born in Stoutsville, Missouri

Lois Marie Moyers, died January 15, 2004 at Kittitas Valley Community Hospital in Ellensburg, WA. Lois has resided in Cle Elum, WA for the past ten years. She was born on November 11, 1914, at Stoutsville, Missouri, the daughter of Ben and Elizabeth Rice. Mother and dad were one of the founding families of Christ the King Catholic Church in Richland, WA, having attended services in a large tent at Camp Hanford, prior to the new church building on Long. Mom had been a resident of Richland, WA since 1944, and became quite adept at dealing with small children, termination winds, and hot temperatures. Lois and Smokey were married in Hannibal, Missouri on September 9, 1936.
Lois spent many, many years in volunteer service, including Cub Scouts and Brownies. She was one of the main participants in handling the alter linens and priests garments at Church. She also spent many years handling hair care services for the residents of Heather House now Life Care Center. Subsequently, she spent over 10 years working at the Richland Food Banks, and received the Project Head Start Volunteer Award for outstanding service. Lois was also an accomplished seamstress, making clothes for her family, which included business suits and wedding dresses. She enjoyed her flowers, plants and roses. She was a voracious reader, reading daily until the time of her death. Lois was preceded in death by her parents, her husband of 55 years, Smokey, and her siblings Irvin Rice, Leo Rice, Rose Arnold, and Pauline Moyers. She is survived by her children, William G. Anne Moyers of Vancouver, WA; Ben P. Delma Moyers of Richland, WA; Glenda R. Moyers of Mounds View, Minnesota; Louise M. Moyers of Cle Elum, WA and Judy A. Keith Lash of Issaquah, WA. She is also survived by seven grandchildren, and seven great grandchildren.
A viewing will be held on Tuesday January 20, from 4:00pm to 7:00pm at Einan's Funeral Home with a Rosary to follow at 7:00pm. A Mass of Christian burial will be held on Wednesday January 21, 2004 at 11:00am at Christ the King Catholic Church with interment to follow at Sunset Memorial Gardens.