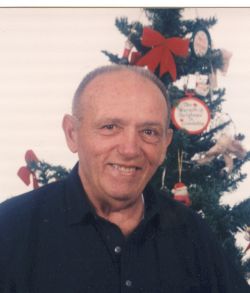 From W., Richland, WA, US | Born in New Castle, Pennsylvania

COSMO A. GIANCOLA West Richland Einans Funeral Home Cosmo A. Giancola passed away May 27, 2004, following a bout with Cancer.

After growing up in Ellwood City, PA with his parents, Clemente and Anna Giancola, he married his high-school sweetheart, proudly served in the US Marine Corps, began his family, and relocated to California.

His love of woodworking evolved into a family operated business which provided a livelihood not only for his family but for many others as well. He received great joy in providing many young men with the knowledge and skill to become a craftsman.

Cosmo's enthusiastic spirit continued in every aspect of his life. He excelled at all he attempted. He enjoyed working in his shop and was a ''Hole-In-One'' golfer.

As a resident of Washington for approximately 8 years, he continued to assist many with their woodworking and building projects through Lowes Home Improvement Center.

Many thanks go out to the people at Lowes for their continued support.

He was a member of Christ the King Parish in Richland, WA.

His family and friends will miss him greatly.

Services will begin with the family receiving friends at Einans Funeral Home Sunday, May 30th 3:00 to 5:00 p.m. The Mass of Christian Burial will be at Christ the King Catholic Church on Monday, May 31st 11:00 a.m. A private graveside service will be held in Sunset Memorial Gardens.