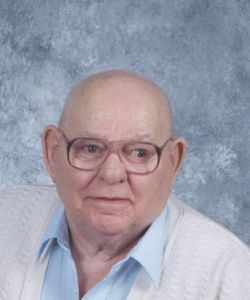 From KENNEWICK, WA, US | Born in BOONE TOWNSHIP, INDIANA

Dad was born to Ralph E. Swearingen and Ada Adahlia Hayword Swearingen, in Boone Township, Cass County, Indiana on August 19, 1924. Dad graduated High School, and then went on to serve in the Army. He was exempt from overseas duty because he was an only son. He served as a Private First Class, Clerk, and Military Policeman.

As the world says SOULMATES, our parents truly were. At the tender age of 5 our mother 4, he announced when we grow-up, Ill marry you. And they did on September 27, 1943. The two of them moved to the Tri-Cities September of 1946.

Dad worked at the Hanford Project, and medically retired from there. He went on to become a motor route driver for the Tri-City Herald, from 1972 until 1997. Dad was preceded in death by, both his parents Ralph E. and Ada A. Swearingen, his two sisters Helen E. Rittenhouse and Winnie J. Kuhn, his two grandsons, Dale Grant Swearingen III and J.J. Goiri.

Dad is requesting no flowers; donations can be made to Christian Biblical Church of God in Hollister, CA.

His Lord said to him, well done, good and faithful servant Enter into the joy of your Lord. Matthew 25: 21