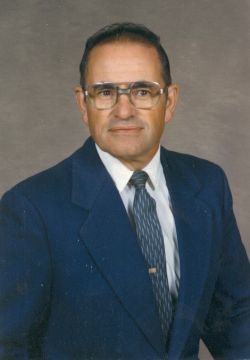 From Benton, City, WA, US | Born in Morrill, Nebraska

Jimmie D. Ross, 76, longtime resident of the Tri-Cities, died June 21, 2004 at his home in Benton City. Jimmie was born December 13, 1927 in Morrill, Nebraska to Goldie and Rosco Ross. After high school, Jimmie joined the U.S. Navy. After his release from the Navy, Jimmie attended Central Washington State College in Ellensburg. He worked a number of years on the Hanford Project before accepting work at Exxon Nuclear/Siemens. He retired from Siemens.

He is survived by his wife Roxie, daughter and son-in-law June and Victor Monteagudo, son Gregory, two granddaughters Vicki and Lisa Monteagudo, his first wife Anne Ross, sister Pauline Diefenbach, and brothers Leo, Dennie and Lannie Ross. He was preceded in death by his mother and father.

Jimmie enjoyed farming and auctions. He was active in the Kennewick Junior Chamber of Commerce as a young man and was a member of the Lions Club of Benton City at the time of his death. He also volunteered at the Food Bank.

Jimmie was a member of the Benton City First Ward of the Church of Jesus Christ of Latter-Day Saints.

The funeral will be June 26 at 10 AM at the LDS Church at 1101 Fay Ave. in Benton City. Viewing will be Friday from 4-8 PM at Einans Funeral Home in Richland.