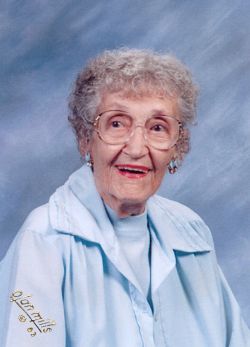 From Richland, WA, US | Born in Sioux City, Iowa

Mary Lou Bock passed away Monday, August 16, 2004, after a short illness. She was born August 21, 1915, to Wayne and Vera Rice in Sioux City, Iowa. At the age of 2 years, she moved with her parents to St Paul, Minnesota where she attended high school and graduated from St. Paul College of Business.

She married Robert J. Bock on November 22, 1938. Upon Bob's release from the Army following WW II, he came to Richland to work. .... and in July 1946, Mary Lou and their 2 children Betty and Tom arrived from Minnesota to make their home. In 1949 their third child Steven was born. Mary Lou and Bob raised their family in an ''A'' house on Symons in Richland where they enjoyed the unique neighborhood closeness of many young couples who were also employed by the Hanford Area and had moved from allover the country to raise their families here.

Mary Lou was a busy ''working Mom'' active in both Girl Scouts and Boy Scouts and was a Secretary employed by General Electric until her retirement in Sept. 1962. She and Bob were charter members of Christ the King Catholic Church and she had participated in the Choir; Altar Society and Queens of the Holy Rosary Guild. In later years she was an active member of the Birthday Club, Leisure Club and Food Volunteers for the Church's Funeral Organization.

In their earlier years, Mary Lou and Bob were ardent bowlers and accumulated many trophies in the different leagues at the ''Atomic Lanes'' in Richland. They loved to be with family and friends hosting parties and barbeques and playing cards till the wee hours.

Wonderful times were shared on the Columbia and Snake Rivers in their boat, the ''Bob-A-Lou'' creating fond memories with the grandchildren. They had a special tradition at Christmas Eve, in which a grandchild was given the honor to place the Baby Jesus in the manger in Grandma's Nativity. This was something they looked forward to sometimes even more than Santa. Mary Lou continued this tradition with her ever growing number of great-grandchildren who she cherished and was always excited to make room for the latest addition to her picture gallery.

Recitation of the Holy Rosary will be at 7:00 p.m. Friday, August 20, 2004, at Einans Funeral Home. The Mass of Christian Burial will be at 10:00 a.m. Saturday, August 21, 2004, at Christ the King Catholic Church. Interment will follow in Sunset Memorial Gardens.