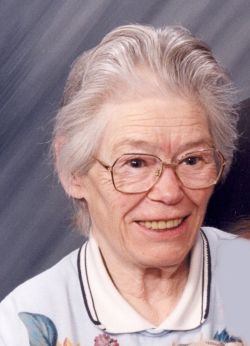 Betty Rosa DeHart was born in Richland, Oregon to Alvin and Rosa Evans on April 16, 1926. She passed away peacefully at her current residence Quail Hollow, on September 28, 2004.

She graduated from Eagle Valley High School and moved to Portland, OR to work as a telegraph operator. She then moved to Oakland, CA., where she met her future husband. She married Lloyd DeHart on September 3, 1946. They moved to Richland, WA in 1947.

She was employed by General Electric for several years.

Lloyd and Betty were active in cub scouting and leading a youth group at their church NWUP. They also enjoyed square dancing and in their retirement years they did a lot of traveling in their 5th wheeler. They visited most of the capitols of the continental USA cities. Betty also enjoyed being a part of a women's bowling team, was president of the National Women's ASCET group and was noble grand of the Rebekah Lodge. She was an avid scrabble player, and enjoyed playing pinochle and other card games with her family. She enjoyed stamp collecting and collecting matchbook covers and was able to attend several national conventions.

Her parents, her husband and two grandchildren preceded her in death. Memorial services will be held at 11:00 a.m. Monday, October 4, 2004, at Northwest United Protestant Church. Interment will follow in Sunset Memorial Gardens.

In lieu of flowers, memorial contributions may be made in her memory to Tri-Cities Chaplaincy Hospice House, 2108 W. Entiat Ave., Kennewick, WA 99336.