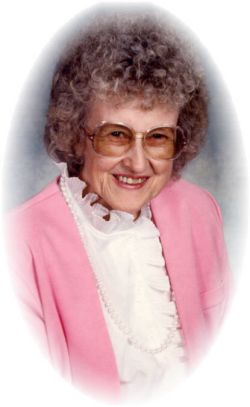 From Richland, WA, US | Born in Bridgeport, Nebraska

Opal Seslar passed away early September 17, 2004, in Richland, Washington, at 84 years of age. She was born July 11, 1920, the youngest of five children, at Bridgeport, Nebraska, to Bernice Claude Hutchinson and Sarah Eunice Alviretta Skinner Hutchinson. She married Duane Vernol Seslar November 24, 1938, at Bridgeport, Morrill County. They later moved to Boring, Oregon, and then to Richland, Washington, in 1954. She was a homemaker who enjoyed sewing, cooking, and gardening in her earlier years. Opal was a quiet and gentle lady much loved by her family, and she was a wonderful role model of motherhood to her three daughters. She was a member of Richland Assembly of God church for many years. Opal is survived by her husband Duane, three daughters Wanda Piper and Barbara Brackenbush of Richland, and Donna White of Kennewick, Washington; five grandsons, Herman Jr., Duane and Kenneth Myers, Brian and Michael Thomas; two granddaughters, Nichole Lindberg and Crystal Foglesong; and four great granddaughters, Genesis, Sarai and Michaela Thomas, and Katelyn Lindberg. Opal was preceded in death by her parents and siblings Ted, Perl and Claire Hutchinson, and Helen Muhr, all of Nebraska. Viewing is planned for 4:00 to 8:00 p.m. Tuesday, September 21, at Einans Funeral Home.
A funeral service will be held at 2:00 p.m. on Wednesday, September 22, 2004, at Einans Funeral Home. Interment will follow in Sunset Memorial Gardens at Richland, Washington.

Please express your thoughts and memories in the online Guest Book at www.einansfuneralhome.com under the obituary section.