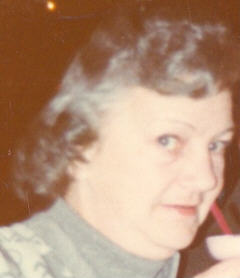 From Richland, WA, US | Born in Watertown, South Dakota

She was born Anna Jane Goss on June 27, 1925 in Watertown, South Dakota to Charles Roy Goss and Estella Agnes Murtaugh. She joined 6 brothers and 5 sisters. First-born twin brothers died before her birth. She grew up in Watertown in the Goss House, which was located across the street from Immaculate Conception Catholic School where she attended grade school. In her secondary school years, the family moved to Portland, Oregon where she finished her schooling and entered the workforce at St. Vincents Hospital.

While in Portland, she made the acquaintance of a young sailor, Ray Norris Henderson. Their friendship blossomed and they were married on October 30, 1948 in Richland, WA at Christ the King Church. After Ray was discharged from the Navy, he was employed at the newly built Hanford Nuclear Reservation where he worked until retirement.

Jane was preceded in death by her mother and father, 8 brothers and 4 sisters. Also preceding her in death was her husband of 46 years, Ray.

Jane was a homemaker who raised her two girls and cared for her husband including a year of intensive care before he died in 1994. She was a communicant of Christ the King Church. She loved to landscape her yard with flowers and upholster her furniture. She loved dogs and raised a Boxer, Scotch, Irish Setter, Hooligan and 4 Springer Spaniels: Freckles, Kate Clancy and Molly. She also enjoyed classical music and reading.

She will be sorely missed by her family and her friends, especially Sherry, Joyce, Faye and Jim. Rosary will be at Einans Funeral Home at 7:00 PM Sunday, June 26th. Her Funeral Mass will be celebrated at Christ the King Church at 10:00 AM on Monday, June 27th, with burial following at Sunset Memorial Gardens. Memorials can be made to Christ the King Church or to the local Humane Society.