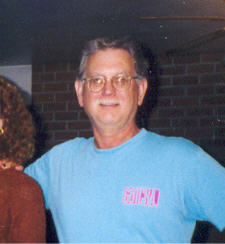 From Kennewick, WA, US | Born in Vashon Island, Washington

Dennis Ross Friedrichs, 64, of Kennewick, passed away June 17, 2005 in Kennewick. He was born October 2, 1940 in Vashon Island, Washington to Elmer and Beulah Friedrichs. He grew up on Vashon Island, College Place, Portland, OR and Pasco.

Dennis graduated from WSU with a major in math and a minor in computer science and later worked as a Senior Research Scientist for Battelle before going into a management position. He was proud of his high ratings on his SDRs and received Outstanding Performance for Software Upgrade 2000 at Pacific Northwest National Laboratory.

His hobbies included reading, Egypt, math, rockets, chess, cribbage, hunting, fishing and hiking. He purchased a cabin on Blue Lake, Idaho where he enjoyed four-wheeling with his cousin Billy Follmer. He took great pride in his XLE B1K Jaguar and his 30-year-old Austin Healey. He had served in the National Guard and was a member of ASM. Dennis was a Treckie and loved all things outer space or sci-fi.

Dennis is survived by his wife Sherry Friedrichs; daughter, Kimberly Ouren, Attorney at Law; mother, Beulah Friedrichs; David Friedrichs; Suzi Larson; Shawn Friedrichs; and great-nieces and nephews. He was preceded in death by his nephew Steven Friedrichs and by his father, Elmer Friedrichs.