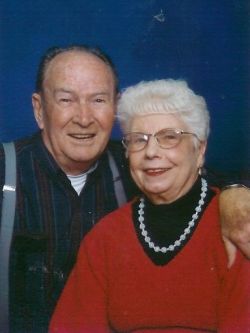 From West, Richland, WA, US | Born in Cudahy, Wisconsin

George Petrina, Jr. died peacefully on July 9, 2005 at home in West Richland, WA. George was born in Cudahy, WI, to George Petrina, Sr. and wife, Mary. He was the oldest of their 5 children. He was raised in Wyoming and was a coal miner as a young man. There he met and married Frances Tootie Van Valkenburg on Jan. 15, 1940. In Aug. 1940, they moved to Bremerton, WA and worked in the Bremerton Navel Shipyard during WWII.

George and Tootie later moved to Silverdale, WA, where George owned and operated the Silverdale Varity Store until 1968. George retired later from Central Kitsap School District in 1981. In 1995, George and Tootie moved to West Richland, WA spending their summers in Washington and the winters in Tucson, AZ.