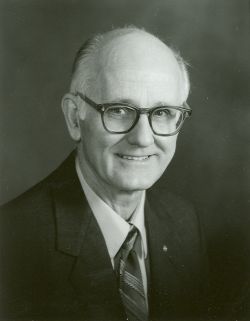 From Richland, WA, US | Born in Afton, Oklahoma

John was born in Afton, Oklahoma on October 25, 1916 to parents John Fred and Edna Rector. The family moved to Urbana, Illinois when he was seven years old so the children could have good educational opportunities.

Always ingenious, John bought a paper route and was very active in scouting, earning the rank of Eagle Scout at a very young age. In Richland he was Scoutmaster for Troop 228 of Central U. P. Church in the mid 1940's.

John attended the University of Illinois the 1935-36 term in the School of Mechanical Engineering. After leaving college, he continued to study and completed many extension night school, technical society and company sponsored classes.

When his work for Scott-Burr Stores transferred him to Sedalia, MO in May, 1937, he met through the coincidence of the same last name, his future wife, Myra June Rector. They were married February 20, 1938 in St. Paul's Lutheran Church, Sedalia, MO. They have celebrated 67 years of marriage.

In February 1944, John was transferred from the Remington Arms Plant in Lake City, MO to the DuPont Plant at Hanford, WA as a tool and die maker. Here he worked at the 100 ''B'' Reactor Building and was very involved in the making of the core rods and was among those in the Control Room the night the Reactor went critical.

He also worked for General Electric and as Senior Development Engineer for Battelle and was a consultant there for two years after terminating employment in 1966.

In 1968, he founded and designed the Tri-Oval track at Tri City Raceways.

John was preceded in death by his parents, infant son, Jimmy Wayne, two sisters and three brothers. He is survived by his wife, June, and children Ann and John Williams, Benton City, WA, Dennis Rector, Kent, WA, Robert and Judy Rector, Richland, Steve and Barbara Rector, Mesa, AZ and Kristi and Bruce Gagnon, West Richland, WA. He is also survived by brothers Leo and Paul and their wives of Champaign, IL and sister-in-law, Marge Rector, Sedalia, MO and many Grandchildren, Great-Grandchildren, Nieces and Nephews.

John is a member of Central United Church. He is an honorary member of Richland Rotary, honorary member of Tri-Cities Elks Club, member of CHREST Museum, ''B Reactor Museum and East Benton County Historical Museum. He has served on numerous boards and committees. In 1996, John was named Small Business Person of South Central WA. He was honored in 1997 for twenty-five years of Dedicated Service to the Metal Powder Industries Federation and inducted as a Fellow of the International Federation of the American Society for Metals in 1999.

Realizing the need for working diversification of the area, he was always eager to help those seeking his assistance to start new businesses.

John loved to travel, and he and June enjoyed all fifty states, Bermuda, the Virgin Islands and Europe.

John leaves a legacy of love to a large extended family, an outstanding work ethic, and he had the respect of his associates.

The family wishes to thank dedicated nurses and caregivers for help given to John the past two years and especially to Dr. Stuart Freeman.

Those wishing to honor Johns memory may contribute to the charity of their choice.