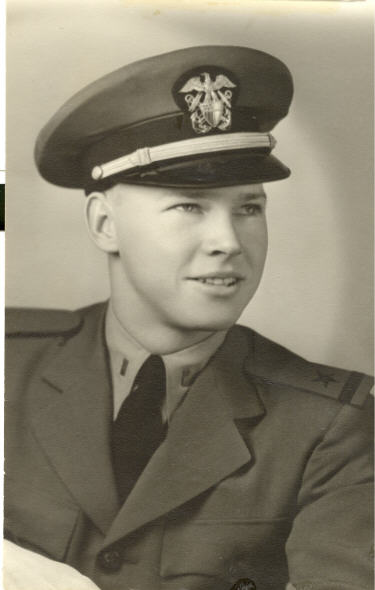 From Richland, WA, US | Born in West Jordan, Utah

George Arnold Last, 80, past away quietly at home on August 8, 2005. George a.k.a. Sam was born October 2, 1924 in the small farming community of West Jordan, UT. He was the third of four children born to George William and Sarah LaVera Carlston Last.
George graduated from Jordan High School in Sandy, UT, in 1942. He received a four-year scholarship to attend the University of Utah in Salt Lake City to study metallurgy. However, in the middle of his sophomore class he was accepted into the US Navy Reserve's V-12 program and was sent to the University of Colorado in Boulder, where, in 1945, he graduated with a BS degree in chemical engineering. He was then commissioned to active duty as an Ensign and assigned to the USS Mendicino and later to the USS Rutland where he spent the next six months sailing the Pacific. He was honorably discharged from active duty in 1946 and signed up for the naval reserve. Without skipping a beat George enrolled in graduate school at the University of Utah, using the two remaining years of his scholarship and the GI bill to earn a MS degree in metallurgy, in 1947. After graduating, George took a job with the American Smelting and Refining Co, in Denver, Co. and in 1948 he married Adella Ann Polve a ''vivacious, petite young lady'' that he had met while at the University of Utah. A year later they moved back to Salt Lake City, so that George could pursue a Ph.D. in metallurgy at the University of Utah, which he received in 1951.
George accepted a job with General Electric GE Company and they moved to Richland, WA, where they had two children: Mary Ann, and George Vincent. In the spring of 1955 they returned to Salt Lake City, so George could work for the Kennecott Copper Co. research laboratory at the University of Utah. As part of this new job, George and Adella and their two kids moved to Santa Monica, CA and Oak Ridge, TN. In 1959, they returned to Richland for good, where George rejoined Hanford's nuclear fuels group. He remained with this group under a variety of contractors e.g. GE, Battelle, and Westinghouse until his retirement in 1989. George was preceded in death by his wife of nearly 57 years, Adella, all of his siblings Arthur Last, Melva Harvey, and Helen Thomlin, and his parents, George W. and Vera Last. He is survived by his two children, four grandchildren, and three great-grandchildren. His daughter is Mary Ann Campbell Don of Kennewick, WA. His daughter's family includes grandson Jeff Beck Stacey and great-granddaughter Enes of Bellingham, WA, and granddaughter Elisa Beck-Watabe Yutaka Watabe of Portland, OR. His son is George V. Last Linda of Richland, WA. His son's family includes granddaughter Shannon Last Sturgis Ryan and great-granddaughters Hannah and Claire of Liberty Lake, WA, and grandson Aaron Last of Ventura, CA. George was a devoted husband, father, father-in-law, grandfather, and great-grandfather. He had a great sense of humor and loved rockhounding, gardening, fishing, and making wine. He will be deeply missed by all those who knew him. A celebration of George's life will be held at 4:00 PM Saturday, August 13, 2005 at his son's home at 1938 Harris Ave., Richland, WA. In lieu of flowers, the family asks that memorial gifts be made to the Tri-Cities Chaplaincy Hospice and Counseling, 2108 W. Entiat Ave., Kennewick, WA 99336.