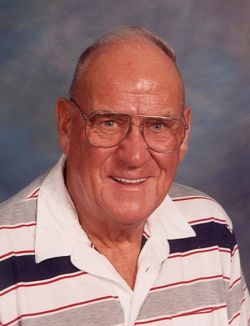 From Kennewick, WA, US | Born in Oak Park, Illinois

He was always interested in sports - especially baseball. He played sandlot baseball and was an avid Chicago Cubs Fan!

He attended Austin High School then worked at Crane Company before entering the Navy in 1942. He served on the aircraft carrier, USS Antietam during World War II. After discharge from the service, Ed returned to Crane Company where he worked beside his uncles Ingolf and Harold.

Ed met his wife, Nina, when her family traveled to Chicago for the wedding of his sister, Ann, and her brother, Keith. The families met again six months later in Enterprise, OR for Nina and Ed's wedding on August 15, 1946. They moved to Chicago where they lived until returning to Enterprise, OR in 1949.

The Gulliksens moved to Richland, WA in December, 1951 where Ed worked at Safeway until 1955 when he went to work at Hanford for General Electric and ITT/FSS. After a brief layoff, he went to work for Exxon Nuclear in security and retired in the spring of 1984.

Ed played softball all of his life until he decided to become an umpire in 1967. He was a member of the KPR and the Tri-City Softball Umpire Association. The highlight of his umpire career, which spanned 5 decades, was umpiring at the Girls 12 and Under National Fastpitch Tournament in 1986. He had the joy and privilege of umpiring several of his granddaughters' games.

Ed was a member of Redeemer Lutheran Church since 1952. He enjoyed taping church services for shut-ins.

He was preceded in death by his parents, Ole & Pearl Gulliksen and his granddaughters, Michelle and Lisa DeHart.

Graveside services will be at 1:00 p.m. Wednesday, September 7, 2005, in Sunset Memorial Gardens followed by memorial services at 2:00 p.m. at Redeemer Lutheran Church.

Memorial contributions may be made in Eds memory to Redeemer Lutheran Church Building Fund, 520 Thayer Dr. Richland, WA 99352 or to the charity of your choice.