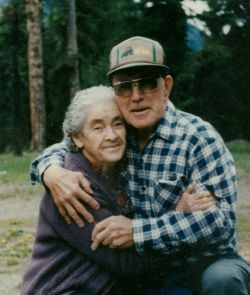 From Richland, WA, US | Born in Marvell, Arkansas

On September 30, 2005, Nora Minnie Bell Clemons Williams passed away peacefully in her sleep at the age of 86, passing from her earthly home in Richland into her eternal home in Heaven.

Minnie Bell was born Nov. 25, 1918, in Marvell, Arkansas to Robert and Hannah Lou Ellie Miss Ellie Clemons. She was raised in the Church of God, went to town on the back of a wagon drawn by mules with a nickel in her pocket to buy a soda pop to split with her sister, and worked hard in the cotton fields before and after marrying Orbid Brice Williams on September 17, 1939. In 1951, Minnie loaded her two sons on a train, leaving all her family and friends behind and joined her husband in the Tri-Cities. One thing she did not leave behind or ever lose was her Southern accent.

Minnie was first and foremost a wife and mother, entirely devoted to her family, raising her children to respect their elders and love one another, serving a huge spread of Southern food at every meal, keeping a spotless home; and welcoming company. She never left her children behind with babysitters, the family did things together. It was everybody did it or nobody did it. As a family, they often went camping, fishing, waterskiing, to drive-in movies, visited friends, made snow cream, shucked corn piled high from the vegetable garden. Minnie canned tomatoes, made jelly, and baked delicious zucchini bread and banana pudding. She loved playing cards learning to play Pinochle and 31 was a rite of passage for new daughters-in-law and grandchildren, was an expert Cribbage player and an active member of the Senior Citizen's Center in Richland and West Richland where she played cards and Bingo and enjoyed making new friends.