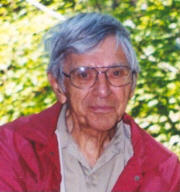 From Richland, WA, US | Born in Manitowoc, Wisconsin

Mr. Nowakowski was born June 11, 1922 in Manitowoc, WI. He attended Sacred Heart parochial grade school and Lincoln High School where he earned a varsity letter in swimming. He was graduated in the class of 1939 and then attended the University of Wisconsin at Manitowoc for a year before transferring to the campus at Madison, WI to major in Journalism. His college career was interrupted for a year while he worked in a shipyard to earn enough money to attend college for another year, and again in 1942 when he enlisted in the U.S. Army.

After basic training in Clearwater, FL, he was assigned to the Army Air Corps, then to cryptographic school in Pawling, NY and finally to the Army Airways Communication Service. He served in communication stations at Kodiak and Elmendorf AFB at Anchorage, AK.

He then returned to the University of Wisconsin, completed work for his bachelors degree and was graduated in the universitys centennial class of 1949.

Mr. Nowakowski worked on daily newspapers in Albert Lea, Minnesota and Webster City, Iowa, before joining the Tri-City Herald news staff as the Richland reporter in 1955.

He covered news events at the Hanford nuclear plant, as well as in the city of Richland. Among them was the transition of Richland from government-owned and operated city, to conventional, citizen-voter ownership.

In 1965, Mr. Nowakowski left The Herald to join the Atomic Energy Commission now Department of Energy in Richland, as public information officer until 1970. During this time, the AEC changed from single-contractor to multiple-contractor operation at Hanford.

In 1970, Mr. Nowakowski resigned as Acting Director of the Information Division to become manager for Mike McCormack in his campaign for the U.S. Congress. He served as Administrative Assistant to the Congressman in Washington, D.C. for a year and then as District Representative in the 4th Congressional District.

In 1973, Mr. Nowakowski rejoined the Tri-City Herald as a general assignment reporter until 1976 when he became an information specialist for the Washington Public Power Supply System, now Energy Northwest, in Richland. He retired from the Supply System in 1985.

In 1943, Mr. Nowakowski married Mary Pritchard whom he had met in kindergarten and who was his grade school and high school classmate. They were apart while she attended Nurses training in Milwaukee, and he attended the university in Madison, and married in an Army chapel at Ft. Custer, MI after he was called to active duty. After discharge in November 1945, he returned to Manitowoc and worked for two years as employee magazine editor of MIRRO aluminum co.

At the time of his death they had been married for 63 years.

He was preceded in death by his parents, Rudolph J. and Josephine Nowakowski of Manitowoc, WI, his sister, Corola, daughter Dianne Perry Nowakowski and granddaughter, Kim Perry.

Services will be at Christ the King Catholic Church, 1126 Long Ave. in Richland on Thursday, September 22nd at 5:00 PM. No reception will follow the service. Inurnment service will be private.