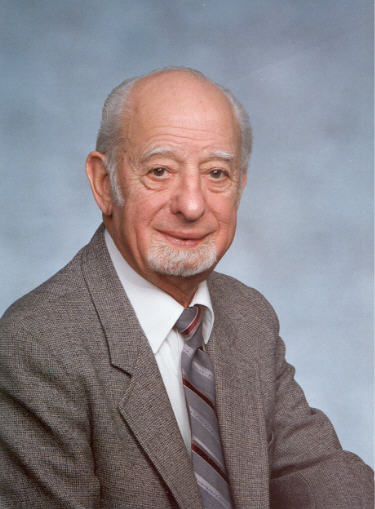 From Richland, WA, US | Born in Seattle, Washington

Sam Volpentest was born on Saturday, September 24, 1904 in Seattle, Washington to Rosario and Anna Maria Volpentest both who had immigrated through Ellis Island to the United States from Italy. Sam was very proud of his Italian heritage. He died at Kadlec Hospital in Richland on Sept. 28, just four days after his 101st Birthday. Sam died just after 5 p.m., so he put in a full workday. He worked full-time at TRIDEC and drove himself to the office every day up until just eight weeks ago.

Sam attended Broadway High School in Seattle where he graduated in 1922. He married Emily Rachel Orcutt on June 16, 1928, and they had three children: William, Jane and Samuel.

For the first twenty-one years after high school, Sam was a salesman for Schwabacher Wholesale Grocery company, and then a manager for Associatied Poultry and Jorgensons Danish Bakeries before moving his family to Eastern Washington in 1949 where he opened and operated his first of many taverns. In addition, as a successful businessman and entrepreneur, he owned restaurants, a radio station, organized two independent banks and became President of the Bank of Richland in 1963 until it was sold to a large state-wide bank.

In 1963 he became one of the three founders of the Tri-Cities Nuclear Industrial Council, predecessor to the Tri-City Industrial Development Council TRIDEC. In 1977 he divested himself of all business activities and devoted all his efforts to community affairs, specifically as Executive Vice-president of TRIDEC working on congressional affairs and federal funding for Hanford and Eastern Washington.

Sam was a familiar figure in the nations capitol with more than 35 years of experience calling on elected officials and various government agencies, never leaving any doubt that he represented the Tri-Cities and Hanford. Sam is probably best known for his longevity in service to his community and will be fondly remembered as the patriarch of the Tri-Cities.

Sam knew President Kennedy, sitting on the dais with him when Kennedy delivered his Swords into Plowshares speech at the dedication of the Hanford Generating Plant attached to N-Reactor in the fall of 1963. He was also on the dignitarys platform when President Nixon visited the Tri-Cities in 1971 to dedicate the construction of the Fast Flux Test Facility.

Projects that he played a key roll in obtaining included the Federal Office Building in Richland, the Hanford Highway Highway 240, the All America City Award for Richland, actively recruiting Battelle Memorial Institute to locate in the Tri-Cities, the Life Sciences Laboratory, the Fast Flux Test Facility, the Hanford House, Iowa Beef and Sandvik Special Metals. More recently his efforts brought funding for the Environmental Molecular Sciences Laboratory EMSL at PNNL, the Volpentest Hazardous Materials Management and Emergency Worker Training Response Facility HAMMER Sams baby, and the Laser Interferometer Gravitational Wave Observatory LIGO. Sam was about the only person who could say the entire LIGO name without a stumble.

It took Sam more than 20 years working with state and federal officials to successfully change the proposed routes of Interstate Highways 82 and I-182 so they would better serve the three cities of Kennewick, Pasco and Richland. Originally highway 82 would have bypassed the Tri-Cities completely. One of the twin interstate bridges over the Columbia River is named in his honor.

He is a past president of the Richland Chamber of Commerce and the Richland Kiwanis, honorary member of the Richland Rotary, 1963 Tri-Citian of the year, and past regent of Gonzaga University and board member of Columbia Basin College Foundation. He is a former member of Kadlec Methodist Hospital Foundation and the Tri-Cities Cancer Center Foundation. He beat bone cancer in the mid 1950s. He was also President of the Italian Club of Seattle and a charter member of the Washington Athletic Club in Seattle. In his early years he played the saxophone in a jazz band.

Sam was not only the oldest living Eagle Scout in the nation, but also the oldest living and active registered lobbyist in the United States Congress at the time of his death. He and his family are also long standing members of Christ the King Catholic Church in Richland.

Sam received a multitude of awards and recognitions through the years, but two that he was most proud of were the Gonzaga University Leadership Award for the highest ideals of Ethics, Faith, Justice and Service; and the Hanford Atomic Metal Trades Council recognition on behalf of Hanford workers for his dedication in preventing workers from injury through hands-on training at HAMMER.

There will be a Rosary at Einans Funeral Home at 7 p.m. on Friday, Sept. 30, 2005, and the Funeral Mass will be held at Christ the King Catholic Church in Richland at 1 p.m., Oct. 1. A family committal service will be held at the Mausoleum at Holyrood Cemetery in Shoreline where Sams wife Emily is buried.

Contributions in Sams name may be made to the Building Fund for the Second Tri-Cities Chaplaincy Hospice House, 2108 W. Entiat, Kennewick, WA 99336.