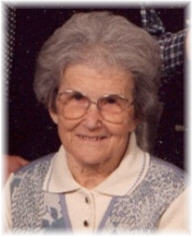 From Kennewick, WA, US | Born in Falk, Idaho

Ruth Arlene Douglass Arlene went to join her Lord and her husband on May 22, 2006.

Arlene was born on August 14, 1918 in Falk, Idaho. Her parents were Violet and Clarence Hartley. She was raised by her mother, along with her brothers, Clearance Logan and Arden, in the Gresham, Oregon area.

Arlene was living in the Portland, Ore. area when she met her future husband, Ervin Howard Douglass Doug. They were married on July 18, 1937. They had two sons, Donald and Wayne, before relocating to the Tri-Cities in 1943. Their third son, Paul, was born here. In 1954 Doug and Arlene were sealed together along with their sons in the Salt Lake Temple.

She and her husband, along with their son Don, owned and operated Arlene's Flower Shops located in Richland and Pasco. The shops were named after her because of her love for flowers. In 1978 the business was sold and Doug and Arlene retired to their long time dream, living on Whidbey Island, WA. They also did extensive traveling during retirement visiting much of the U.S. and other countries, such as South and Central Americas and Costa Rica.

Following the death of her husband, Arlene returned to the Tri-Cities to live in order to be closer to her sons and their families.

Arlene was a wonderful mother, wife, homemaker and grandmother. At the time of her death she had 16 grandchildren and 14 great-grandchildren. She loved animals, walking, and visiting with friends. She loved working in her gardens but would often sit a spell to enjoy some knitting or needlepoint.

She was a resident at Callaway Gardens in Kennewick at the time of her passing.

Friends and family are invited for graveside services 10:00 AM Thursday, May 25, 2006 at Sunset Memorial Gardens, Richland. Visitation and viewing will be Wednesday, May 24th from 6:00-8:00 PM at Einans Funeral Home, Richland.