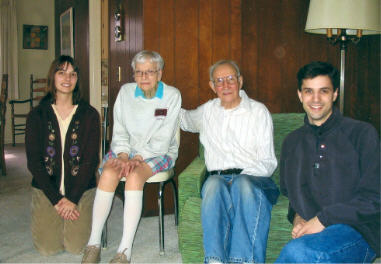 From Richland, WA, US | Born in Strawberry Point, Iowa

EINANS FUNERAL HOME Betty Lou Ruppert Betty was surrounded at the time of her death by her immediate Richland Family. Her out of state son had a chance to tell her on the phone that he loved her and she said Thank You. He was on the way to the airport to be with her.

Betty was born September 1, 1922 in Strawberry Point, Iowa to Charles Blanchard and Florence Rowan Blanchard. Her early childhood memories were of engaging in age appropriate behavior especially with the kids next door. She enjoyed playing the piano and her proudest moments were being a wife and raising a family and enjoying her grandchildren. She enjoyed sight seeing and eating meals in the outdoors, especially in the Pacific Northwest with its deserts, mountains, lakes, rivers and oceans, and playing bridge and winning with her long time friends. She also enjoyed visiting family and friends in Iowa.

Her proudest accomplishment was enrolling in nursing at University of Iowa, where she met her husband of 63 years, Herman Jake.

She was a life time member of the Order of the Eastern Star, Oelwein chapter # 45.

Preceding her in death and waiting for her: father, Charles Blanchard; mother, Florence Blanchard; brothers Burton and Dean Blanchard.

Betty, Mom and Grandma, we say Au Revior and the family rejoices in your homecoming to be with the Lord.

At Bettys request, there was a private memorial and graveside service for the family.

Donations can be made to the charity of your choice.

Express your thoughts and memories in the online Guest Book at www.einansfuneralhome.com