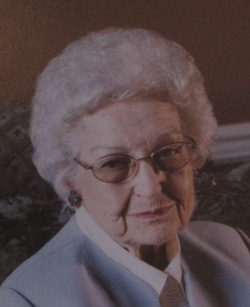 From Richland, WA, US | Born in Portsmouth, Ohio

Lorraine Mae Williams, 84, passed away peacefully on June 11th, 2006. Lorraine Williams was born on May 28th, 1922 in Portsmouth, Ohio. Her parents were Forrest Pearl and Edith Benson. She had two sisters, Eileen and Opal.

Lorraine married Jack P. Williams on October 22nd , 1938. She and Jack had one child, Sandra Kay Williams Wolkenhauer on July 1st, 1939. Lorraine was a homemaker who loved to cook and sew. In 1949, they moved to Escanaba, Michigan. Lorraine served as a Girl Scout Troop Leader for many years.

In 1969, Lorraine and Jack moved to Kansas where Jack served as a Baptist minister in several small churches and Lorraine served as a ministers wife. They lived in Salina, Leon and El Dorado, Kansas.

In 1982, Lorraine moved to Richland, Washington to be near her daughter and grandchildren. In Richland, at the age of 60, Lorraine attended Columbia Basin Community College to receive her GED and worked toward an AA degree. She worked in retail at The Infant Tree in Pasco and the Hallmark Store in Richland. She worked for and then became the owner of the Kennewick Newcomers Service.

Throughout her years in Richland, Lorraine volunteered at the Kadlec Medical Center gift shop and the Richland Senior Center. She attended Central United Protestant Church in Richland, Washington.

A memorial service will be held at Central United Protestant Church on Friday, June 23rd at 10:00 am to celebrate her life.