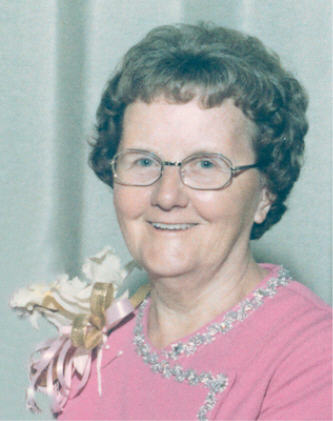 From Richland, WA, US | Born in London, England

Our wonderful mother, Ethel Catten Anderson passed away on July 3, 2006 just one month shy of her 98th birthday. She was born in Chelsea, London, England on Aug 5th, 1908. She was the 13th child of fifteen children born to Herbert Catten and Martha Jane Eade.

Ethel immigrated to the United States with her family when she was 8 years old. The family settled in Magna Utah. When she was 16, she met Henry Albert Anderson and they were married August 14, 1924 in Farmington, Utah, and were later sealed for all eternity in the Salt Lake Temple. They were married for over 72 years before Henry died in 1996.

Henry and Ethel made their home in Salt Lake City where 8 of their 9 children were born. They moved to Washington in 1944 during World War II to work for the DuPont Company who was the contractor for the Hanford Project. First they lived in White Bluffs, then in Sunnyside, and when Richland was built, the family moved into a new government home. Their last child was born in Richland, the biggest baby born at Kadlec hospital up to that time. She spent the rest of her life in Richland.

Ethel was an excellent homemaker and a devoted mother. She spoiled her children and her fifty grandchildren with her home made bread, goodies, and handiwork. Her home was a place of refuge, peace, and love, not only for her children and grandchildren, but to every one who entered. She loved to play table games and was an expert when it came to Scrabble. She was an active member of The Church of Jesus Christ of Latter-day Saints, holding the office of President in the women's Relief Society and children's Primary organizations. She volunteered numerous hours in the Family History Library extracting genealogy data from Spanish records.

Ethel instilled within her children a love for the Lord, a love for music, a love of reading good books, a love for her beautiful flowers, and a love for one another. She was a great example of charity, faith, love, and service.

She is preceded in death by her husband, Henry, her parents and all her siblings. She is survived by her four sons and five daughters and their spouses: Henry and Patricia Anderson of Kennewick , WA; Richard and Donna Anderson of Sun City, Arizona; George and Pam Anderson of Richland, WA; Kenton and Marilyn Anderson of Rexburg, Idaho; Becky and Gene DeGraw of Richland WA, Shirley and Russ Fadely of Vilonia, Arkansas; Isabelle and Richard Wolfe of Hamilton Montana; Diane and Carl Volmer of Richland, WA; Linda and Galen Walley of Soap Lake, WA. She is survived by 47 or her50 grandchildren, 153 great grandchildren, and over 40 great-great-grandchildren.

Funeral services will be held Monday, the 10th of July, at lOAM in the Richland Stake Center of the Church of Jesus Christ of Latter-day Saints on 1720 Thayer Drive. Interment will follow at Sunset Memorial Gardens in Richland. All are invited to attend.

Express your thoughts and memories on our online guestbook at www.einansfuneralhome.com