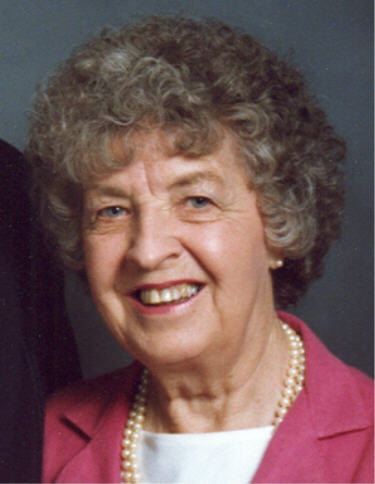 From Richland, WA, US | Born in Sandpoint, Idaho

Beulah May Whittemore McGahey died April 20, 2007 peacefully in her sleep. She was born Feb. 27, 1913 in Sandpoint, ID. She was the 4th of 5 children born to Curtis and Helena Gehler Whittemore. She is preceded in death by her siblings Harold and Myron Whittemore, Carmen Crawford and Cleo Jones, and husband William Arthur McGahey. The family moved to Ladysmith, Wisconsin and she graduated from high school there. Her father was very musical and was the band leader in town. Beulah played the piano with him for many performances and even played the music for the silent pictures.

Beulah went to Minneapolis to Beauty School and then came to the Tri-Cities to be closer to her family and work as a beautician. That's when she met her husband Bill McGahey. They were married in 1937 and had 2 daughters, Janice Laybourn and Susan Taylor. Bea and Bill, as they were known, were founding members of the Northwest United Protestant church, and were very active throughout the 60 years they attended. You could always find Bea in the church kitchen with an apron on. Beulah volunteered for many years at Kadlec Hospital in the Auxiliary. She received special recognition for over 1000 hours of service. Beulah spent her life caring for her family, friends and neighbors. There was nothing she enjoyed more than having everyone over for Sunday dinners or potlucks on the back patio. At 85 she was playing baseball and soccer with her great grandchildren. We all feel so fortunate to have had her with us for so long and will miss her dearly.

For the past 7 years she lived with her daughter Janice and son-in-law Dennis Laybourn and was cared for so wonderfully by Krinda, Evelyn, Sharell and Shirlene. She is survived also by her 3 grandchildren, Darren Laybourn, Tamara Carswell and Karina Thorne and 8 great grandchildren.

Graveside services were held Mon. April 23, 2007 at Riverview Heights Cemetery and the memorial service will be at Northwest United Protestant Church on April 29 at 1:30pm.