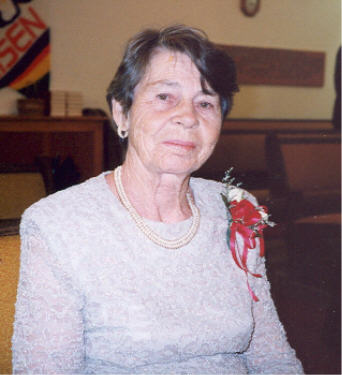 From Pasco, WA, US | Born in Battenfeld/Eder, Germany

Erna Elisabeth Clark Siebott passed peacefully from this life June 2, 2007 at Life Care Center of Richland, WA. She was born August 2, 1923 in Battenfeld/Eder, Germany to Heinrich and Elenora Siebott. Erna met Dudley Clark while he was in the service stationed in Germany. She immigrated to the U.S. in July 1953 and married Dudley. In 1955 they homesteaded their farm in Block 15, Pasco where they raised four children.

Special thanks to Tri-Cities Chaplaincy and Hospice and staff at the Life Care Center of Richland for your care and support during Erna’s last months. Thank you chaplains, Kirk and Sylvanna for your untiring care.

A memorial service will be held at Einan’s Funeral Home, Richland, WA on Saturday June 9th, at 1:00PM.