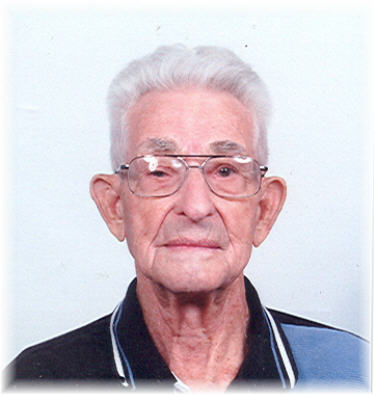 From Richland, WA, US | Born in Elk Point, South Dakota

George was born February 20, 1912 in Elk Point, South Dakota to Lowell and Amy Pond. In 1941 he decided to follow the cry ''Go West Young Man, Go West'' and ended up in the Yakima Valley where he farmed for several years. From there his adventures took him and his family to Wapato, Washington for three years and in 1955 George moved his family to Richland where he retired from the City of Richland some 33 years ago. George loved to fish and hunt, which he did up until he reached the age of 89.

George was preceded in death by his wife of 57 years, Mildred H. Pond, 7 sisters and 2 brothers.

He is survived by his wife of 11 years, Doris Rexene Pond; daughter Deanna McCoy, son-in-law William McCoy, granddaughter Teresa Shepard, great-granddaughter Jaelen Williams, all of Bothell, WA; and a brother, Lowell Pond, of Pahrump, NV. When George married Rexene his family grew instantly by leaps and bounds with the following children: David Enlow of Walla Walla, WA., Marvina and Rocky Mayhugh of Springfield, OR, Sybil and Rusty Bauer of Bend, OR, Cindy and Don Hickman of Finley, WA, Robert Enlow of Richland, WA and Joe Enlow of Willits, CA and Dawn Enlow; 21 grandchildren and 26 great-grandchildren.

In lieu of flowers, please make a contribution to Hospice at The Chaplaincy, 2108 W. Entiat, Kennewick, WA 99336.