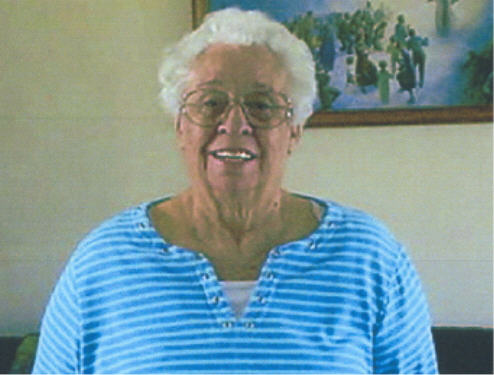 From West, Richland, WA, US | Born in Logan, Utah

Joyce lived with her family in Utah until she was eight years old. They moved to White Bluffs, WA to work a dairy farm and grow fruit. After being evacuated from White Bluffs in 1942 because of the Hanford Project, the family resided in Pasco waiting for a home to become available in Richland. George Leavitt, her father, was the second to be employed with DuPont as a bus driver for the Hanford site. Joyce attended school from third grade until her Junior year in Washington and then completed her Senior year in Utah, graduating from North Cache High in Richmond, Utah.

After graduating and returning to Washington, she married her love. They met at Castleburys Drugstore, then on the corner of Symons and Goethals in Richland, she being a fountain server. Dick had come to Washington after serving in the Air Force. They were married, and later sealed to each other in 1957 in the Logan Temple.

The Karren family was very involved in the beginnings of the LDS Branch. Throughout her life she has served in many capacities in her church, enjoying them all. Her love for her Savior was evident as she lived a life of kindness and service to many. She leaves many dear family members as well as dear friends, but is being greeted by many now as she believed life is eternal.

Joyce loved to do crafts, crochet, knit, sew and was indeed a great homemaker. Meals were served to many around a large family table. She faithfully attended ballgames, piano programs, school events, dance recitals, and any event that supported her children. She was a willing PTA worker and Room Mother as her children attended school.

Joyce and Dick were great examples of good parents and wonderful grandparents. They worked hard together raising their nine children. To supplement the household income, Joyce tended children in her home and worked at the church bookstore for many years. They were best friends, fishing and camping together, square dancing, and serving church callings and missions together. They served as temple workers in the Seattle Temple and three missions as missionaries in the Ireland Mission, visitor guides at the Salt Lake City Temple Visitors Center, and helpers at the Church Bishop Storehouse locally. They developed lovely friendships and reminisced of their experiences fondly. They were married 57 years.

Joyce will be remembered as a happy woman, seeming to have a sure understanding of her reason and purpose in life. Nothing made her happier and prouder than the accomplishments and happiness of her family. She loved being in the know and involved in the family until the last days of her life. She now carries on with a healthy body able to do all she once did again.

The family would like to express appreciation to all those who attended to Joyce during her time of illness. We feel she had superb medical care and appreciate all that Hospice has done.

Funeral services will be held at 10:00 AM Monday, June 25, 2007 at the Church of Jesus Christ of Latter-day Saints Paradise Chapel in West Richland. Graveside will follow at Sunset Memorial Gardens, Richland. Visitation will be Sunday the 24th, 4:00-6:30 PM at Einans Funeral Home, also in Richland.