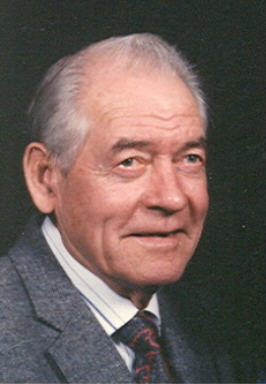 From Richland, WA, US | Born in Ludlow, South Dakota

There will be a Celebration of life held on Thursday June 21, at 1:00pm at Richland Lutheran Church. Prior to the service there was a private graveside held at Sunset Memorial Gardens, in Richland. Viewing will take place at Einan's Funeral Home on Wednesday June 20, 2007 from 5:00pm-8:00pm.

Palmer was born in Ludlow, SD, to Carl and Jenny Knutson, who homesteaded there. He was raised in Bowman, ND. He married Lucille Farnsworth in 1940. They, his parents and siblings migrated to the Hanford Project in 1943. He helped build the houses in Richland and when the homes were sold in 1958, he went into business as a general contractor, remodeling and specializing in putting basements under existing houses. He retired at age 62.

Palmer enjoyed life and family and friends, who joined him at boating, fishing, crabbing, water-skiing, snow skiing, motorcycling and traveling in the RV.

Palmer was blessed with a multitude of friends. He was deeply loved and will be greatly missed.