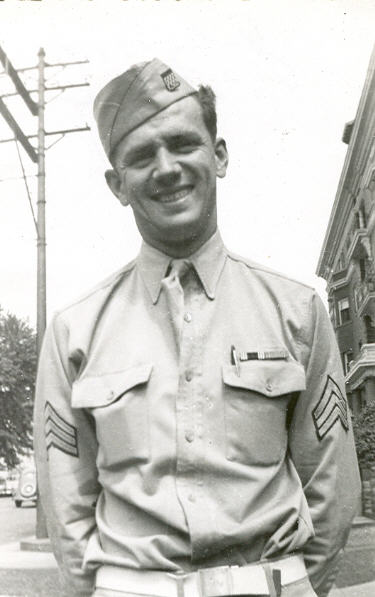 From Richland, WA, US | Born in Great Falls, Montana

While Dad was born in Great Falls, Montana, he was raised in Boulder, Colorado by his grandparents, after his mother passed away in the influenza pandemic of 1918 when he was 6 days old.

Dad was very athletic growing up and played organized football through junior college. He had a lifetime love of sports and he always found time to indulge his son, Mike, in any sporting activity that was happening in the front yard.

Dad fought in the European theater in WWII. He attained the rank of Staff Sergeant, leading a squad of men in the 26th infantry division of the 1st Army the Big Red One. In 4 years of service, he fought many battles in the Rhineland, including the Battle for the Remagen bridgehead in March 1945 that secured passage over the Rhine River into the heart of Germany. He finally was tasked with guarding prisoners at the Nuremberg war trials. In his later years, Dad would talk to us about the War and he was very proud of his service to his country.

While in the Army, Dad met the girl who would become his wife. Mary Peg Stewart and Dad first saw one another at a dance pavilion in an amusement park in Denver, CO. They were married May 1st, 1943 during one of his furloughs. After the end of WWII and Dad was discharged from the Army, Dad & Mom moved to the Tri-Cities in 1948. They were married for 64 years and had one son, Mike McAndrew in 1962.

Dad worked for the many contractors running the Hanford project through the years. He was the manager of the Hanford site mail services in downtown Richland, retiring in 1985.

Dad spent the last 30 years of his life blind. His eyes were his wife, Peg, and his radio was his window to the world. He loved listening to high school especially the Bombers and college especially WSU sports and also the talk show hosted by Art Bell.

Dad loved to play the state Lotto games and had darn good luck at it, too. We believe he came out on the plus side in this endeavor. Dad was never one to complain about anything, except if his sports team performed poorly. He was truly Army tough and this lasted to the end. With the recent loss of his wife, Peg, we believe Dad felt it was time for him to go and he did so with dignity, on his terms.

He was preceded in death by his loving wife of 64 years, Peggy in February 2008.

He is survived by his son and wife, Mike & Marci McAndrew and grand dog Roxy, all of Richland.