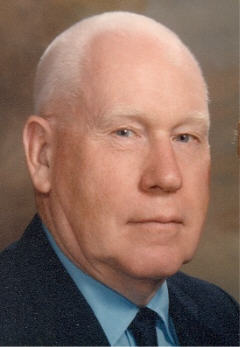 From Richland, WA, US | Born in La Grande, OR

Fred passed away March 18, 2008 at his home in Richland, Washington. Fred was born and raised in LaGrande, Oregon where his family owned a jewelry and watch repair business. Fred had been a resident of Richland for over 50 years.

After graduating from LaGrande Oregon high school he joined the Army Air Corps and shortly thereafter he transfered to the Air Force. During WWII he served in the Air Force as a pilot instructor for B52 bombers. After the war he was in the Air Force reserves for over 30 years. He retired from the Air Force in 1980.

After leaving his career in the Air Force he went on to complete his schooling at Eastern Oregon College with a BS degree in Education. After several years working for General Electric as a supervisor in the maintenance department he was transferred to Battelle Northwest. Fred retired from Battelle Northwest in 1984 as a meteorologist and one of the pilots of the company planes doing atmospheric research throughout the country and Caribbean.

He married Colleen Sullivan in the LDS temple in Cardston, Alberta, Canada in 1963. He was a member of the Church of Jesus Christ of Latter Day Saints serving in several callings. He always enjoyed his time spent with the young men and was very involved with the boy scouts.

Fred and Colleen enjoyed sharing several hobbies such as participating in the Richland Light Opera Company and traveling around the world. Fred served on the Board of Directors, President, Business Manager, and sound engineer as well as producing several of the Richland Light Opera musicals over the years. In 2006 he was given a Life-Time Achievement Award from this organization.

Fred enjoyed all types of outdoor activities such as fishing and hunting. He was an active member of the Richland Gun Club for over 25 years and served as a certified instructor. Additionally he was an instructor for the Junior Olympic Shooting Program. He thoroughly enjoyed working in his back yard and garden. He was an avid model train collector and very accomplished at leather crafts and wood working. He gave several hand made items to his beloved nieces and nephews which they continue to enjoy.

The family would like to thank Dr. Surrender Wadhwa, MaryLou Hubbe, ARNP and the Richland Paramedics for the outstanding care Fred received.

In lieu of flowers donations may be made to the America Cancer Society, American Heart Association, or the Richland Fire Department.

Funeral services will be held Saturday March 22, 2008 at 2 PM at the LDS Jadwin Chapel Building.