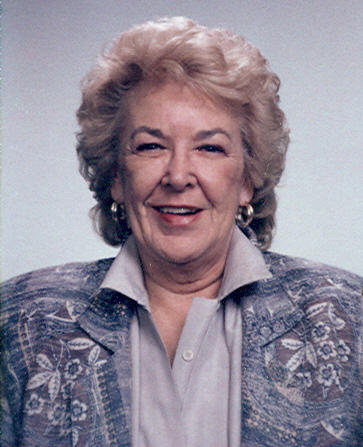 From Richland, WA, US | Born in Salt Lake City, Utah

Barbara Lorraine Barron was born March 28, 1932 to her parents Albert and Vivian Barron in Salt Lake City, Utah. Barbara moved to Richland with her parents in 1945 and attended Richland Columbia High School, graduating in 1950. While attending high school, she helped raise her younger brother Blaine and worked in her parents' restaurant, The Old Dutch Mill, which was located near the mouth of the Yakima River. In 1951, she married her high school sweetheart, James Jimmy Doyle and began working for General Electric while he attended Washington State College. In 1952, she began the adventure of raising five adventurous and totally different, loving children. As the kids began to attend school, she became very active in the Lewis & Clark PTA. Along with organizing the annual school carnival and other functions; she served as president for a number of years. Later, she received the PTA Golden Acorn award in appreciation for her many contributions to the organization. While raising her young family, she also served as leader of her daughters' Blue Bird troops. Barbara's wit and sense of humor was constant and often merciless. Her connection with her children, in her presence or out was, as one of the kids once said, "Spooky". She was most happy when her family was together. While some parents look forward to relaxing summer vacations, she and Jim would load up the station wagon with their kids, a few of their friends and, along with one or two other families, head for Diamond Lake for a week of fun and bedlam. Those memories will never be forgotten. In 1969, she began her career as office manager of the Benton-Franklin Community Action Committee. She later joined Battelle-Northwest PNNL as an employment specialist and spent a number of years traveling to various Colleges and Universities around the country as a recruiter. Barbara was also Battelle's representative to the Northwest Placement Association, where she served one year as President. She retired from Battelle in 1989 as a financial specialist. While raising her children, the house was constantly filled with noise, laughter, and love. She always welcomed her kids' friends into her home and many considered her their second "mom". Barbara took great pride in her family and was extremely proud of the fact that all five of her children graduated from college and have successful careers. As a grandmother, she was devoted to her eleven grandchildren, taking great joy in spoiling each of them individually. After retirement, she enjoyed traveling with Jim or a group of her buddies – Leavenworth will never be the same! She was also active in the Meadow Springs Bridge Club. Anyone who was blessed to know Barbara knew that she spent most of her time helping others. She was fiercely devoted to her family and taught her children and grandchildren to be strong, self-reliant, and to strive for high goals. Her greatest gift was an unwavering love and devotion to each one of us who is left behind. Gone from our sight but never from our hearts, we are her husband of 57 years, Jim Doyle; daughter Kelleen Doyle of Richland; son James Laura Doyle of Renton; daughter Shawna Paul Boolen of Richland; daughter Darcy Doyle-Hupf of Seattle; son Timothy Mary Doyle of Richland; her sister JoAnn Earl Skow; and brothers Blaine Barron and Gene Barron. Grandchildren: Carri Slaugenhaupt; Shawn Doyle; Erin and Connor Boolen; Lindsey, Taylor, Vincent, and Jaybry, Breanna, Skye deceased Hupf; and Collin and Shayne Doyle. Barbara was preceded in death by her parents Albert and Vivian Barron. We would like to express our appreciation to the Seattle Cancer Care Alliance, the Tri-City Cancer Center and the wonderful staff at the Tri-City Hospice. In lieu of flowers, donations may be made to the Tri-City Cancer Center and the Tri-City Hospice.