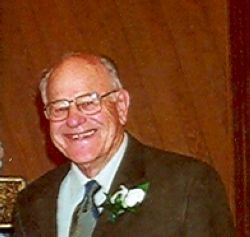 From Pasco, WA, US | Born in Los Angeles, California

Don was born in Los Angeles, CA to Peter Joseph Hovley and Eleanor Elizabeth Pelster on October 18, 1925. Don and his three siblings were raised in Simi Valley, CA, where he helped his family on their farm. When Don turned 16 the war broke out and he was active in the lookout station for enemy war planes. Don lettered in football and basketball, played trombone and sang in glee club. Don majored in engineering at Cal Poly Tech State Univ. in San Luis Obispo. Don taught high school carpentry & woodshop for 5 years. He worked at a sodium reactor as an engineer at Atomics International. He was a laboratory scientist at McDonnell Douglas Labs in Richland. While in CA, Don and Patricia Ione Havens were married and blessed with 13 children. Don lived in Simi Valley until 1967 and then moved to Richland, WA to work at Hanford. Two years later Don moved his family to a farm in Pasco where he became a farmer. Don farmed for many years and later became an agriculture consultant.

Don had a very strong Catholic upbringing where his great faith in Christ and love of the Blessed Virgin Mary grew. Don was happiest being with family at swim meets, camping trips, family reunions, swimming in the family pool and gardening. Don met Sharon Toole about five years ago and was immediately smitten. Sharon helped renew Don's love of travel, skiing, dancing and his zest for life. Sharon is truly a blessing to the Hovley family. Don is survived by his wife, Sharon; his sister, Catherine Elliott; and his 13 children: Donna, Ellie, Vince, Steve, Sue, Cam, George, Mark, Ann, Art, Ben, Julie and Pete; 3 step-children: Shannon, Nick and Neal; 1 niece, Susanne; 35 grandchildren; and 11 great-grandchildren. Don was preceded in death by his wife, Patricia; his sister, Eleanor and brother, George.
A Rosary will be held on Tuesday, April 22nd at 6:00 p.m. at St. Patrick's Catholic Church in Pasco. Funeral Mass will be held on Wednesday, April 23rd at 10:00 a.m. at St. Patrick's Catholic Church in Pasco. Graveside service will follow the funeral service. In lieu of flowers, please make donations to St. Vincent de Paul Food Bank or Tri-City Prep.