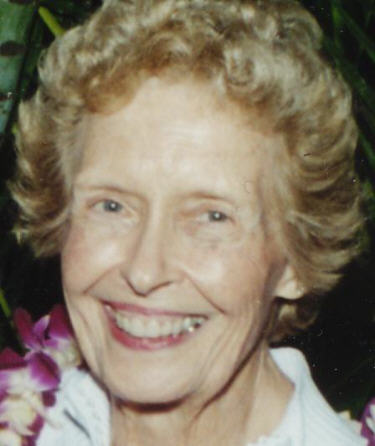 From Richland, WA, US | Born in Selfridge, North Dakota

Doris Marie Gladstone died on June 9, 2008 following a brief illness. She was 83.

Doris was born to John and Freda Meyers Haberman in Selfridge, North Dakota on November 7, 1924. She was the oldest of three children.

She grew up in McLaughlin, S.D. She played the piano and organ for the church and played flute in the school band. In high school she excelled in typing and shorthand and was valedictorian of her class.

While in high school she worked in the print shop owned by U.S. Congressman E.Y. Berry. She operated the linotype, producing the weekly newspaper.

After graduation, she worked in the U.S. Attorney's office in Spokane, where she processed condemnation of land at Hanford for the national war defense project.

Later, while working as a Court Reporter for Judge Frank Gladstone, she met his son Wayne Gladstone, a law student at the University of South Dakota. Doris and Wayne were married in 1947 and had four children: Candy, Shelley, Brian and Mark.

In 1950, Doris and Wayne moved to the Tri-Cities, where they lived for 58 years. In 2007, they celebrated sixty years of love and devotion to each other.

While Wayne practiced law, Doris managed the home, family and a career with grace and accomplishment. She was a secretary for two law firms and SeaFirst Bank. In 1957, she joined General Electric working as executive assistant to Dr. Herbert Parker, the Director of Hanford Laboratories. She subsequently worked for Battelle and for Wayne in his law office. She also managed the Mortgage Department at GESA Credit Union.

During her career, Doris was president of Gentrics, the Hanford secretary's professional association. She served as a PTA officer, a board member for the Mid-Columbia Symphony, and a friend to local schools and charities.

Doris was an elegant lady, distinguished by her warmth and her sense of style and propriety. She loved entertaining and was a gracious hostess, preparing elaborate, gourmet meals for family and friends. Fun times often involved games of charades, bridge, and home movies.

Doris enjoyed family vacations on the Oregon Coast. She was a long-time member of the Tri-City Country Club and Christ the King Catholic Church in Richland.

Doris was preceded in death by Wayne, who died in December 2007. She is survived by her children and their spouses: Candace and Joe Devary, of Richland; Shelley and Phil Noble, of Bellevue, WA; Brian Gladstone, of Arlington, VA; and Mark and Sandra Gladstone, of Richland. She is survived by nine grandchildren: Brooks and Scott Devary; Michael and Andrea Noble; Amanda and Grant Gladstone; Ryan and Nathan Gladstone and Aubrey Gladstone Loftus. She also is survived by five great-grandchildren; a brother, Howard Haberman in Arizona; and a sister, Beverly Sampson in South Dakota.